Alumnae Association of the Royal Jubilee Hospital School of Nursing

Alumnae Association of the Royal Jubilee Hospital School of Nursing

"Non sibi, sed toti (Not for ourselves, but others)"

In 1920, the Alumnae Association of the Royal Jubilee Hospital School of Nursing was formed by graduates. The association was very active until the end of 2019.

While the alumnae had a social function and a means to keep in contact with the graduates, the association completed valuable projects.

Read more on this page to learn about their achievements.

The alumnae thanks the staff and administration of the Royal Jubilee Hospital and Island Health for many years of collaboration and support. 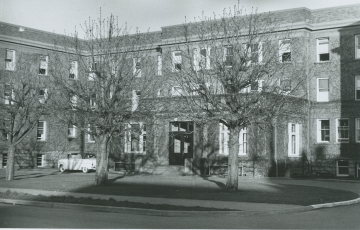 The Provincial Royal Jubilee Hospital opened its doors on May 21, 1890 and, a few months later, the directors of the hospital decided to establish a School of Nursing.

The programme was initially two and-a-half years long but, as the medical field advanced, it was increased to three years. Students spent their first six-month probationary period in the classroom and then spent the next two and-a-half years rotating between classroom instruction and ward experience. In the final year, senior students were introduced to being in charge on evening, night, and weekend shifts, resulting in a lot of shift work in the final year.

Until the 1960s, students were required to live in residence; a home away from home where young women learned to be resilient, self-determined, and self-sufficient. It could be a lot of fun, and the friendships formed during training lasted a lifetime. But training was also hard work and the relationships developed at the residence were an essential source of support for students.

While many graduates of the school continued to work at the Royal Jubilee Hospital, there have always been many opportunities for registered nurses outside of hospitals. Many Jubilee grads returned to the school or went to universities as instructors or administrators, helping to mentor the next generation, while others worked outside hospitals in private clinics, public health, and medical research. Others traveled the world as missionaries, in the Canadian Armed Forces, or with the World Health Organization.

By the early 1970s, nursing schools across British Columbia were closing and nursing education was transitioning to universities. By mid-1982, the school was reduced to 33 students and five faculty. The last class of the Royal Jubilee Hospital School of Nursing graduated in January 1983.

The Alumnae Association of the Royal Jubilee Hospital School of Nursing supports nursing education through several scholarships and bursaries.

The RJH School of Nursing Alumnae Bursary is available through the Registered Nurses Foundation of British Columbia.

The RJH School of Nursing Alumnae Association Student Award is an entrance scholarship and available through the University of Victoria.

The RJH School of Nursing Robins/Irving/Rossiter Nursing Scholarship is open to current Island Health employees who also meet the eligibility criteria below. More information about this scholarship is available on the Island Health intranet (accessible only to those with a current user ID and log-in permissions) in the Scholarships section.

Who is eligible to apply for these scholarships and bursaries?

All RJH School of Nursing graduates, their immediate family, or descendants (e.g. spouse, child, sibling, grandchild, and anyone else related by birth or adoption in perpetuity) can apply for any one of the scholarships or bursaries listed above. Family members of the graduates must state their relationship to the graduate, the graduate's maiden name (if applicable), and the year of graduation. 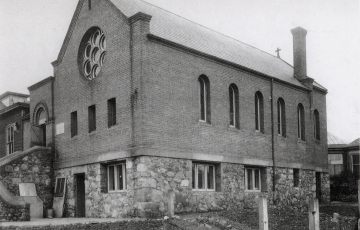 In 1909, Mrs. Teresa Pemberton donated funds for the construction of the RJH Pemberton Memorial Chapel in memory of her late husband, Joseph D. Pemberton, “for the benefit of patients and their families of all denominations.” The Chapel exterior was designed by J.C.M. Keith, who designed Christ Church Cathedral in Victoria. The interior was designed by Sophie Drummond, the Pembertons’ daughter, who was an artist and contemporary of Emily Carr.

An elaborate three-hour service was conducted to dedicate the Chapel on December 29, 1909, by Bishop Perrin (Anglican Diocese of British Columbia), assisted by the Reverend Joseph McCoy (Knox Presbyterian Church), the Reverend T.W. Gladstone (Reformed Episcopal), and the Reverend Carson from the Baptist Church.

Between 1904 and 1924, the Chapel was used as a maternity ward and later became a male convalescent ward for soldiers returning from war.

The multi-faith sanctuary was restored and returned to its original use in 1925.  At that time, weekly services at 6 am were compulsory for all nursing students.  A nursing diary described how student attendance suddenly improved in 1943 when the “handsome” Bishop Coleman arrived to conduct Chapel services.

In 1979 the Chapel was dedicated as a Heritage Building by the City of Victoria. Sadly, a year later the chapel was deemed unsafe and boarded up when extensive renovations physically isolated and disconnected the Chapel from the hospital. 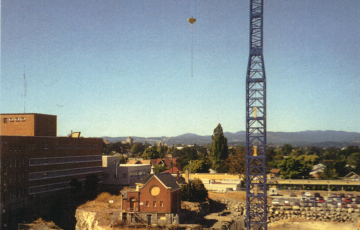 Twenty years later, the President of the Alumnae Association of the RJH School of Nursing was appalled to learn about, then see, the state of the Chapel. Soon after, she approached Greater Victoria Hospital Society (GVHS) with a $500 donation to be used as seed money for a restoration project.

By 1997, a Chapel redesign proposal by Paul Merrick Architects was agreed to by the GVHS Board of Directors. Farmer Construction Company in Victoria was awarded the contract, and in 1998 the RJH Heritage Building Restoration Committee was formed.

To begin the project, the rock face under the Chapel was dynamited and cleared to provide a useable space. Complicated seismic upgrading of the heritage building continued as Farmer Construction Company proceeded on the project. Company workers were so intensely involved that they often worked after hours on their own time.

Over the next five years, Alumnae members dedicated themselves to fundraising assisted by RJH Spiritual Health leaders, provincial grants, community donations and services in kind.  The Alumnae Association alone raised and donated $800,000.

Several historic additions enhanced the beauty and story of the Chapel.

• The WW 1 Nursing Sisters stained-glass window designed by Maurice Hartle, an Orderly at the Veterans Hospital, was relocated from the RJH Memorial Pavilion to the Pemberton Chapel’s vestibule in 2002.

• Two framed scrolls honouring Nursing Sisters in WW1 and WW2 hang on the walls in the Chapel sanctuary.

• A bronze statue of a graduate in uniform was commissioned by the Alumnae to recognize all graduates from the RJH School of Nursing. Measuring 57 cm, it was sculpted by Nathan Scott.

• A Casavant Pipe Organ, handcrafted in Quebec, was installed in the organ loft. This unique organ was donated by a Royal Jubilee Hospital graduate in 2002.

• Colourful oil paintings of angels were created on the side of the cross beams inside the Chapel by a student nurse in the 1950’s.

• The pump organ in the chancel, of the same age as the Chapel, was the gift of a private donor in 2019.

The special event was attended by twenty members of the Pemberton family whose strong connection to the hospital dates back to 1858, when A. F. Pemberton, Magistrate and Director of the Bishop Cridge Hospital, raised funds for the new Provincial Royal Jubilee Hospital.

In 2004, The Pemberton Memorial Chapel was the proud recipient of the Heritage Building Restoration Award given by the Victoria Real Estate Board.

For the following 15 years, the Alumnae Volunteers of the Chapel welcomed patients, their families, staff and visitors into this sacred space.

In June 2005, the RJH School of Nursing Archives/Museum opened to the public for research and general viewing. This Museum became known for the depth of its nursing history. Graduates provided their oral histories that were then transcribed to become part of the permanent collection. Antiquities from the nurse’s residence, teaching labs and the Jubilee hospital also added unique dimensions to those stories.

Through the ensuing years, members of the Royal Canadian College of Organists assisted the Alumnae with weddings, memorials, fundraising concerts and annual Christmas sing-alongs in the Chapel for the enjoyment of patients, their families and visitors.

With the dissolution of the RJH School of Nursing Alumnae Association, the stewardship of the Pemberton Memorial Chapel was officially transferred to the Royal Jubilee Hospital on March 20, 2019.

The RJH School of Nursing graduates have had a long and memorable association with the Pemberton Memorial Chapel and are proud to consider the Chapel our permanent legacy. 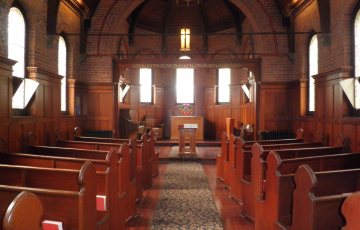 The Alumnae Association of the Royal Jubilee School of Nursing is proud to have played an integral part in uniting the three Royal Jubilee Hospital Memorial Gardens. They are the Pemberton Chapel Garden, the Pemberton Operating Room Garden, and the Dr. Inazo Nitobe Memorial Garden, located on the lower level courtyard. Each garden was funded and created independently of one another. 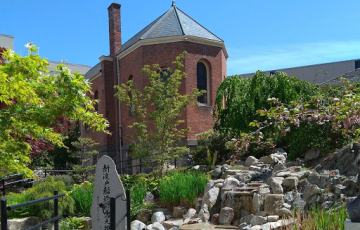 In the spring of 2003, following the opening of the chapel, the alumnae of the RJH School of Nursing completed fundraising for an elaborate landscaping plan. 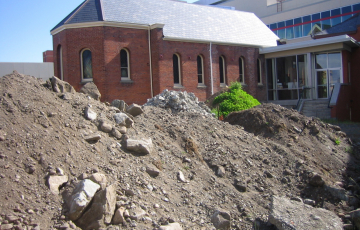 Landscaping preparations outside the chapel

The three gardens were coordinated under the direction of volunteer horticulturist, Brian Stretch. Brian's dedication and invaluable expertise assisted the alumnae and the hospital departments to complete the overall project.

After four years of development, the Pemberton Chapel Garden was officially opened on July 24, 2007. For the following 12 years, a small group of alumnae dedicated themselves to planting, pruning, mulching, and genereal seasonal garden maintenance under Brian's leadership.

In 2010, a unique streetcar shelter was lifted by crane from its previous site on Richmond Road and placed in the Pemberton Chapel Garden courtyard. This historic shelter that previously serviced the #10 route from 1890 to 1947, is on the City of Victoria heritage registry. 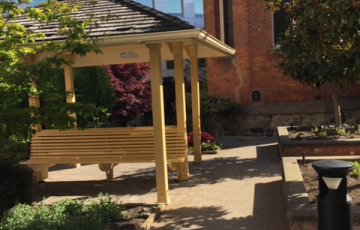 The stewardship of the Jubilee Heritage Gardens was officially transferred in June 2019 to the Royal Jubilee Hospital Facilities Maintenance Department.

Dissolution of the Royal Jubilee Hospital School of Nursing Alumnae Association occurred December 31, 2019. Creating the gardens fulfilled the alumnae's vision to leave a place of tranquility and peace for patients, their families, staff, and community visitors. 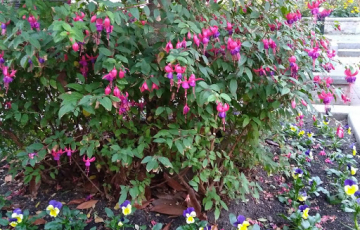 Prior to the Royal Jubilee Hospital School of Nursing closing in 1983, alumnae volunteers began collecting and accepting donations of records and artifacts related to the history of the School. The Archives and Museum was located in the basement of Begbie Hall when it was first created.

In the early 2000s, the alumnae association undertook the restoration of the Pemberton Memorial Chapel and the development of the Archives and Museum in the lower level of the chapel building.  A vault was created within this space to protect precious documents and artifacts.

We compiled an impressive collection of over 200 oral and written histories depicting alumnae members’ training years and careers as they faced the challenges of evolving medical care in all aspects of nursing across Canada, and around the world.

In 2019, the archives and auseum closed and our collection was distributed to other historical organizations across Canada.The entire archival collection (including over 3000 photographs, over 200 oral and written histories, and 60 record boxes) was transferred to BC Archives. The artifact collection (uniforms, instruments, textbooks, student and graduate pins, and souvenirs from Student Nurses' Residence, days and other nursing memorabilia) was transferred to the Royal BC Museum, the Saanich Pioneer Society, the Victoria Medical Society, the University of Victoria, and several other small museums across British Columbia.

Although the Royal Jubilee School of Nursing Alumnae Archives and Museum is closed, the collection will continue to be preserved for future generations. Anyone interested in getting access to materials in the collection for research purposes is welcome to contact these organizations directly.