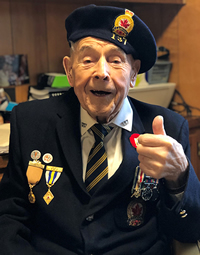 You may recall our story in June​, when North Island Hospital Campbell River staff with Dutch backgrounds, helped to deliver a Certificate of Recognition from the Canadian Government to Carl Kolonsky, 95, as he recovered in hospital from the surgery.

“On behalf of a grateful nation, we present this Certificate of Recognition to Carl Kolonsky as a tribute to your selfless acts of service and sacrifice during the Second World War, in defence of Canada and our shared values of freedom, democracy and the rule of law," the certificate stated.

The hospital's site director, Carl's physiotherapist, the region's Director of Clinical Services Delivery and others with Dutch backgrounds expressed their gratitude to Carl as well.

He was just 20 years old when he shipped into Antwerp in late October 1944 to join the Royal Hamilton Light Infantry. He was in Holland six months later, on May 5th, 1945, when German Forces surrendered in Holland. 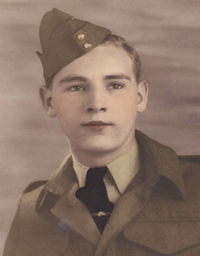 He remained there, involved in the collection and disarming of prisoners of war. He was eventually posted to a different regiment, the Highland Light Infantry, where he served as part of the Canadian Army Occupation Force in Germany into 1946.

Seventy-five years later, and almost six months after his hip replacement, Carl hasn't lost the determination that led his son Don to describe him as “a tough old bird."

“That went really well," he told The Weekly last week about the hip replacement. “I'm still recuperating but I'm doing well. They treated me really well. I can't complain about that."

Carl Kolonsky is walking proof that you can't keep a good man down if he's determined to get back up.

“I've been working out at home," he said. “I've got a peddling outfit here, plus a stretching gizmo that's hung from my clothes closet, where I exercise every day, so I'm doing quite well."

The pandemic has not made things any easier. Carl was invited by the Dutch and Canadian governments to travel to Holland last May for the 75th anniversary of the liberation, but COVID-19 put that celebration on hold.

He's also disappointed to see this year's Remembrance Day public ceremonies being dramatically scaled back or cancelled across the country.

“I'm the oldest veteran alive for Campbell River," he said. "I honestly believe I should be involved somehow."

And as for that visit to Holland, Carl's determined to get to the next celebration.

Thank you Carl, for your service to your country so many years ago, and for your inspiration today.