The public reminds us every day that there are heroes working at Island Health.

Some of the team came together in Campbell River this week to honour a different kind of hero, bringing a little bit of Holland, and Canada's thanks, to a World War II vet who helped liberate the Netherlands 75 years ago.

Campbell River's Carl Kolonsky, 95, is one of an ever-dwindling number of World War II vets who liberated Holland.  He was just 20 years old when he shipped into Antwerp in late October 1944 to join the Royal Hamilton Light Infantry. He was in Holland six months later, on May 5th, 1945, when German Forces surrendered in Holland. He remained there, involved in the collection and disarming of prisoners of war. He was eventually posted to a different regiment, the Highland Light Infantry, where he served as part of the Canadian Army Occupation Force in Germany into 1946. 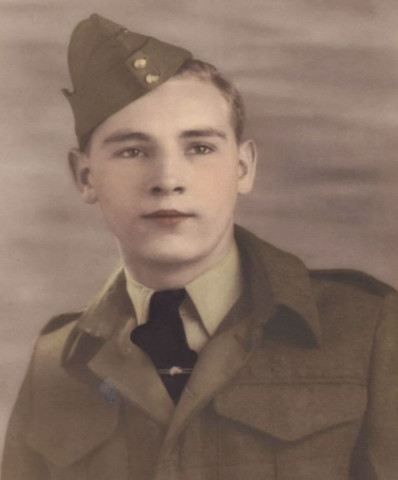 Carl was nominated by the Dutch and Veterans Affairs Canada to travel to Holland for two previous anniversary commemorations but was unable to attend either. He was looking forward to attending a grand celebration of the 75th anniversary in May, as a special guest of the Dutch people, but plans were cancelled along with so many other events when the pandemic hit.

“Unfortunately, COVID stepped in the way," says his son Don. “He is one of the handful that was going to go."To make matters worse, Carl suffered a fall in May, which brought him to the North Island Hospital in Campbell River for hip replacement surgery and recovery.

Don says his dad is doing well. But pandemic-related restrictions mean father and son have been meeting only by phone.

Then, just after his father's fall and hospitalization, there came mail from Ottawa.

“On behalf of a grateful nation, we present this Certificate of Recognition to Carl Kolonsky as a tribute to your selfless acts of service and sacrifice during the Second World War, in defence of Canada and our shared values of freedom, democracy and the rule of law," said the Honourable Lawrence MacAulay, Minister of Veterans Affairs.

Don figured such recognition would help to boost his dad's spirits and help in his recovery, so he called Island Health to see if we could deliver the certificate to his father in hospital. 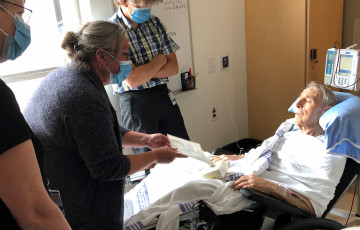 “It was an amazing thing you did," she said in an emotionally charged certificate presentation to Carl in his hospital room with others of Dutch background in attendance. “Understand how grateful people are, and how pleased I am to be able to give you that certificate today."

“It's such a pleasure to hear from you people," Carl said. “Thank you very much."

Don has been working with his father's care team to find out how he's doing, when best to call and so forth.

“He is getting incredible care," he said. “The ladies that are looking after him. Christine, Casey, Virginia and Katie are the names I know, I am so pleased that they are there. They say he's such a pleasant guy to work with. I can't say enough about the staff working there."

Even prior to his dad's fall, Don says Carl and his home care workers were doing their part to maintain his self-isolation at home.

“Seventy five years ago he was fighting a war to liberate Holland, and now he's fighting the war against COVID," Don said. “He's a tough old bird."

He said his father is disappointed that the trip to Holland didn't happen, but if all goes well, it's only been postponed. 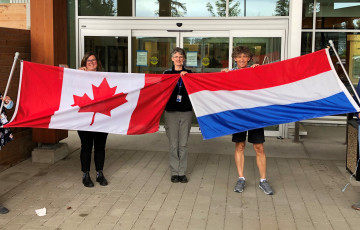 Outside the hospital's main entrance, the group unfurled the Dutch and Canadian flags to honour Carl Kolonsky and the special relationship between the people of the two countries. Joining them for the thank you was Pieter Koeleman, a member of the local Dutch community who has worked on past commemorations of the Dutch liberation.

“I've know Carl for a long time," he said. “Every time we had a commemoration, he was there. This year he was going to the Netherlands, so it was a disappointment to hear it was cancelled."

“My mom & dad were teenagers during the war," said Physiotherapist Berend Henckel. “There were lots of stories about how it impacted the family, for generations. (Carl) is one of the very last true connections to that era."
Ingrid van Kesteren, Manager of Transition & Support, heard many stories from her parents about the occupation and the liberation.

“I've always really appreciated looking after people who fought in the Netherlands in the Canadian Army, because then I had an opportunity to say 'thank you' in person, like we did today," she said. “It's a privilege and I'm really grateful, because the country would have been so different and our futures would have been completely different if the country had not been liberated."

Michelle Crosby is Geo 1 Director of Clinical Services Delivery. Her mother is from Holland.

“My grandparents during the war actually lost a son because they couldn't get the medications to be able to treat him," she said. “My mother, now Canadian, has gone back a couple of times for the liberation ceremonies and with my father, who is Canadian, and they've been so celebrated. They're always so overwhelmed by the appreciation of the Dutch people."

Rozema said the presentation of the certificate to Carl “was the highlight of my day." Her father-in-law was 10 when the Canadians liberated his area in the north of Holland.

“He always talked about how amazing that time was, when they traded eggs for cigarettes and chocolate," she said. “He laughed when he needed hospital care. He'd say 'that's fair, the Canadians gave me cigarettes, so the Canadians now can look after me.'"

And how the sacrifices of others, so many years ago, made today what it is.