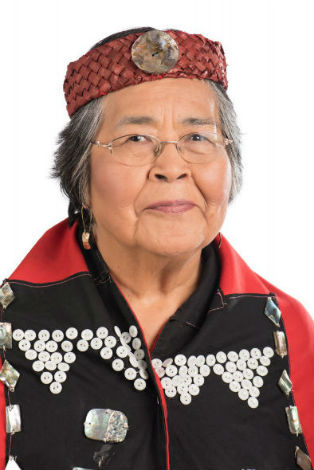 CAMPBELL RIVER/COMOX VALLEY – Dr. Evelyn Voyageur, a champion in Indigenous health care and a North Island Hospital advisor, has been nationally recognized as the recipient of the Indspire Award for Health.

“She has dedicated her life to improving the health of Indigenous peoples through her more than five decades in the nursing profession,” stated the awards committee. “A trailblazer in Indigenous health, Dr. Evelyn Voyageur is bringing back the holistic way of looking at health in First Nations communities by integrating spiritual, emotional, physical, and mental health in her work.”

Dr. Voyageur was a strong and vocal guiding force on the North Island Hospital Project which created new hospital campuses in the Comox Valley and Campbell River. A member of the NIHP Indigenous Working Group, she was instrumental in the development of a culturally safe and inclusive environment at the new hospital campuses, including the creation of the Gathering Place – a non-denominational room at each campus for ceremony and quiet reflection for people of all cultures – and development of policy around use of the rooms.

“I was very vocal,” Dr. Voyageur remembered with a smile. “If things are not the way they should be, I will say it.”

Thanks in part to the Indigenous Working Group, the Gathering Place at each campus became a place for spiritual reflection and ceremony for people of all faiths. The rooms have additional sound proofing and independent ventilation systems to accommodate music, drumming and smudging ceremonies. The rooms have separate entrances for patients and public. They feature lots of cedar, fireplaces, and color schemes consistent with those of North Island First Nations.

“Evelyn demonstrates tremendous leadership in health care and we are so grateful for her contributions toward a culturally safe environment in our newest hospitals in the North Island,” says Island Health Board Chair Leah Hollins. “We are delighted to see her recognized nationally and we encourage her to continue to be a vocal advocate.”

Celebrating its 25th anniversary in 2018, the Indspire Awards represent the highest honour the Indigenous community bestows upon its own people. Over 25 years, the Indspire Awards have honoured 350 First Nations, Inuit, and Métis individuals who demonstrate outstanding achievement.

Despite going to St. Michael’s Residential School at age ten, Dr. Voyageur is a fluent speaker of Kwakwala and an active matriarch in the Kwakwaka’wakw culture and traditions. A member of the Tsawataineuk First Nation of Kingcome Inlet, she has dedicated her life to improving the health of Indigenous peoples through her more than five decades in the nursing profession.

She has co-authored a number of publications on cultural safety and nursing, sharing her knowledge with generations of nurses to come. She was instrumental in the development of A’eka-lixl, a community-led health initiative where culture is the foundation of wellness in Wuikinuxv First Nation and D’zawada’enuxv First Nation.

From 1999 to 2003, Elder Voyageur worked with the Indian Residential School Society, where she supported survivors healing from the trauma they experienced.

In 2003, Dr. Evelyn Voyageur became the first Indigenous nurse to receive Health Canada’s First Nations and Inuit Health Branch Award of Excellence in Nursing. The award celebrates the dedication, initiative and excellence of nurses employed by First Nations communities, Health Canada and Inuit communities who work in partnership to improve the health of Canada’s Indigenous peoples.

At North Island College, where Dr. Voyageur has been an Elder-in-Residence since 2006, she has mentored and led students and faculty in the Bachelor of Science in Nursing degree, instilled cultural safety values in curriculum and encouraged students and faculty to learn from remote First Nations communities in a fourth-year NIC nursing course over 10 years.

Since 1980, she has been active in the Canadian Indigenous Nurses Association, and was its President from 2010-2012. She also founded the Native and Inuit Nurses Association of British Columbia in the early 1980s to help education those who work with First Nations communities. She also sat on the board of St. Joseph’s General Hospital in Comox.