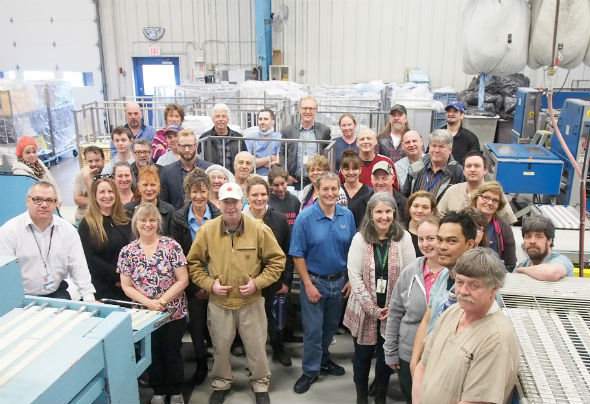 The regional laundry has transitioned from a society to an Island Health operation.

“This partnership is great news and demonstrates how Island Health and Cumberland Regional Hospital Laundry are working together, creating a climate of respect. I’m proud of the team coming together to benefit the health system,” said Health Minister Adrian Dix.

“We are excited to be welcoming the 49 CRHLS employees to the Island Health family,” said Murray Hutchison, Island Health General Support Services corporate director. “The transition of the laundry facility to Island Health was seamless and there will be no impact on our patients or on Cumberland Laundry clients.”

With that acute care transfer, it made good business sense for Island Health to operate the laundry. Costs will be reduced as there will be no duplication of administrative overhead. And now the laundry can directly leverage the strengths of Island Health’s purchasing power.

The transition was completed without any job loss. The laundry’s two management and 47 FTE unionized staff were all offered transfers to Island Health.

“I’ve always had a good rapport with Island Health as far as getting members’ issues and concerns addressed,” said Todd McAdam, Hospital Employee’s Union (HEU) Director of Membership Services. “They gave us lots of notice. We did it quite quickly. We got it out to the members and it was well received. Everything went pretty smooth.”

Island Health and the laundry workers celebrated their new relationship with a barbeque at the Cumberland plant on March 23rd.

Island Health, one of seven health jurisdictions in British Columbia, provides health care and support services to more than 765,000 people on Vancouver Island, the islands in the Salish Sea and the Johnstone Strait, and mainland communities north of Powell River.

With more than 20,000 staff, 1,900 physician partners, 6,000 volunteers, and the dedicated support of foundations and auxiliaries, Island Health delivers a broad range of health services, including: public health services, primary health care, home and community care, mental health and addictions services, acute care in hospitals, and much more across a huge, geographically diverse region.