DUNCAN – Staff and volunteers are celebrating a golden anniversary at the Cowichan District Hospital (CDH.) The hospital on Gibbins Road opened its doors in September 1967. 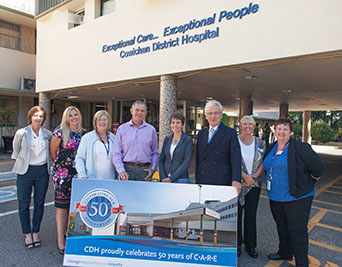 On its 50th anniversary, celebrants were invited to a staff appreciation BBQ lunch to share stories about what they love best about their work. On hand were some special guests who were recognized as their careers have covered nearly the full five-decades at CDH. Archival photos of the original hospital were on display to capture the evolution of the site.

“For 50 years Cowichan District Hospital’s medical professionals, support staff and community volunteers have dedicated themselves to providing quality public health care for those in the Cowichan Valley,” said Nanaimo-North Cowichan MLA Doug Routley, on behalf of Health Minister Adrian Dix. “I grew up in Duncan and am still proud to call the Cowichan Valley home. This hospital is important to me and my family as I know it is for residents throughout the region.”

“On behalf of the Board of Directors and everyone at Island Health we wish our employees, medical staff and volunteers at the Cowichan District Hospital a happy 50th anniversary,” said Kathy MacNeil, Interim President and CEO of Island Health. “We are so proud of the respectful, compassionate and high quality care they provide to the patients in the Duncan area, and how they commit themselves each and every day to do even better.”

The Cowichan District Hospital has 126 funded beds, serving approximately 83,000 residents of the Cowichan Valley. Much has changed since the hospital opened. The greatest difference is likely how much healthier and longer people are living. In 1967 the average life expectancy for a woman in the Cowichan Valley was 75 years; men 69. Now women will live on average 88 years and men 85 years*.

“The hospital has proudly served generations of families in the Cowichan Valley,” said Jon Lefebure, Chair of the Cowichan Valley Regional District and Regional Hospital District. “We have been pleased to support CDH and its staff and we look forward to working with Island Health on the concept plan and building our future hospital that will serve generations to come.”

Replacement of the Cowichan District Hospital is Island Health’s number one capital project priority. A concept plan to replace CDH is being developed and is expected to be submitted to government by the end of the year.

Island Health, one of seven health jurisdictions in British Columbia, provides health care and support services to more than 765,000 people on Vancouver Island, the islands in the Salish Sea and the Johnstone Strait, and mainland communities north of Powell River.

With more than 20,000 staff, 1,900 physician partners, 6,000 volunteers, and the dedicated support of foundations and auxiliaries, Island Health delivers a broad range of health services, including: public health services, primary health care, home and community care, mental health and addictions services, acute care in hospitals, and much more across a huge, geographically diverse region.