You’re never too old to learn something new about sex—just ask Penny Pitcher.

"Holy moly, we had nothing," says Pitcher, 73, recalling the not-so-good old days of sex education when she was a teenager. "You went and saw a cartoon—‘this is how a baby is made’—and that was the extent of it. Nowadays, it’s incredible what teens get by way of sex ed."

Sexuality and sexual health are typically seen as topics for younger generations. "So many of the problems that teenagers have, seniors have as well," says Pitcher. "In our case, it’s from a lack of knowledge."

The good news is that steps are being taken to fill this gap—including an innovative, theatre-inspired effort that includes Pitcher as a volunteer actor. This project is supported by Island Health’s Community Wellness Granting Program. Now in its third year, the program offers one-time funding for projects that support the health and wellbeing of those living on Vancouver Island.

In 2019, Island Health awarded 56 grants totalling nearly $765,000 to help organizations support creative, community-driven projects that address topics ranging from healthy cooking and communal gardening to the opioid crisis and traumatic loss. As part of this process, the Island Heath program funded two projects focused on aspects of sexuality and gender, albeit with different audiences in mind—one is for seniors via Island Sexual Health, and the other is for LGBTQ2S youth via QCHAT.

Island Sexual Health’s seniors-focused initiative, cheekily titled You’re Doing What?! At Your Age?!, is the brainchild of project coordinator Leah Tidey, a 27-year-old doctoral student in applied theatre at the University of Victoria. Initially inspired by a lecture she attended on seniors and sexuality, Tidey delved deeper into the issue.

"The thing that stuck out for me was the social stigma aspect—how we think that sexuality and sexual health is a prerogative of youth," she says. "We don’t really talk about how it changes and how sex is so important for our health as we age."

To get more people talking, Tidey uses applied theatre, a field of theatre that explores and inspires community engagement, education and social change. Aided by project assistants Alexandra Haupt and Jordan Monks, the project involves a staged play reading with a script that’s been developed and performed largely by seniors.

"My passion is educating through theatre. This project is educating me, to say the least," says 66-year-old Phyllis McGee, another volunteer actor. "In my peer group, sexuality is not typically spoken of, so that results in me being uncomfortable bringing it up. However, I think I’m more comfortable now, especially with this play."

Tidey notes that theatre provides participants with an opportunity to explore sensitive topics without divulging highly personal details. "Instead, we can talk about sexual health from a character’s perspective," she says. The resulting script revolves around the story of a woman in her late 60s who unexpectedly meets someone else a year after her long-time husband’s death. With the inclusion of the senior’s granddaughter, it takes an honest, entertaining look at sexuality across generations. Topics range from consent and negotiating boundaries with a new partner to getting tested for sexually transmitted infections. (STI rates among seniors have risen notably in recent years.)

McGee was also struck by what she learned about "gender fluidity" during the process.

"I was associating that with young people only," she says. "But I have now learned that no, that’s not the case—our sexuality and preferences can change over our lifetime."

In November, Island Sexual Health organized play readings at three different venues, followed by workshops for the actors and audiences, which Tidey and Gibson helped facilitate. The aim of the workshops was to discuss the reading and recreate scenes with different outcomes.

"It’s a way to get the audience to share their own ideas, and then see them happening," says Tidey.

In the new year, the goal is to develop a permanent resource for Island Sexual Health that will feature the script and workshop content, along with research and guidelines for others interested in using applied theatre as a teaching tool.

"That’s an incredible gift to an organization like ours," says Gibson. "As a non-profit, we’re constantly looking for opportunities to provide education, but to do that in a funded way."

Both Tidey and Gibson acknowledge that their project couldn’t have happened without a community wellness grant (Island Health provided $12,000 for You’re Doing What?!). Moving forward, they’re keen to obtain additional funding and tailor the project to health care workers. "We’re going to work with medical students and health care providers to empower them with knowledge as well, to be able to talk to their clients," says Tidey.

Conor Zeer-Wanklyn is also grateful for the funding that QCHAT received; the unique peer-support service for LGBTQ2S youth benefited from a community wellness grant worth $4,720.

"It allowed us to kick off this project, build it from the ground up and launch it in BC," he says.

A few years ago, Zeer-Wanklyn volunteered at an LGBT youth helpline based in Toronto, where he was pursuing his studies (he’s currently a UBC medical student in the Island Medical Program).

"It was something that I looked forward to every week," he recalls. "I really liked talking to people about the difficult questions and the tough times they were facing."

The experience inspired him to start a similar offering in BC. In summer 2019, he co-founded QCHAT with Victoria entrepreneur Corey McPherson. The service offers a safe, confidential way for youth across the province to discuss issues with volunteers, all of whom are under 30 and identify as LGBTQ2S. Inquiries can be made by telephone, text, email and instant messaging. The website, found at www.qchat.ca, also features an online directory that highlights resources throughout the province. "We can problem-solve, we can talk about navigating various systems in BC such as the health care system, we can provide referrals, we can provide emotional support," says Zeer-Wanklyn. 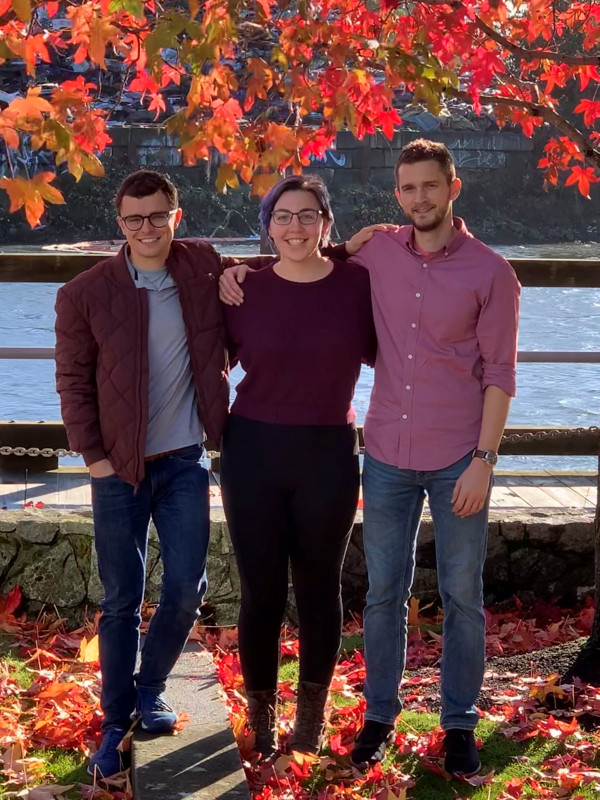 QCHAT currently operates Mondays, Tuesdays and Wednesdays from 6 p.m. to 9 p.m. While it’s still early days, it’s estimated that that QCHAT will receive more than 1,000 inquiries annually. Topics of discussion include gender and sexuality; relationships with family, friends and romantic partners; finding community; and dealing with issues such as bullying and loneliness.

Certainly, LBGTQ2S youth have to grapple with an array of challenges. For example, one-third of bisexual youth and 54 per cent of gay and lesbian youth reported that they had experienced discrimination due to their sexual orientation, according to the 2018 BC Adolescent Health Survey. And non-binary students—defined by the survey as those who don’t identify as male or female, and those unsure of their gender identity—were most likely to report having depression, anxiety disorder and other mental health conditions.

"LGBT youth face very unique risks and needs and pressures as they grow up," says Zeer-Wanklyn. "We’re in a situation to better address those."

Hannah Koning, one of QCHAT’s volunteers, would have welcomed such a service when she was growing up.

"To know that someone else is like me, that would have been phenomenal," she says. Now, she’s using her experiences to help inform how she supports clients who use QCHAT. "At the very least, I can validate you in saying that you’re not alone," she says. "That validation is so important—just knowing that there’s at least one other person who is like you can go so far in terms of your identity feeling important and real."

Read this story, and others, in the Winter 2020 issue of Island Health Magazine.