“Great support, 100% of the time”: Island Health and the BC Early Hearing Program 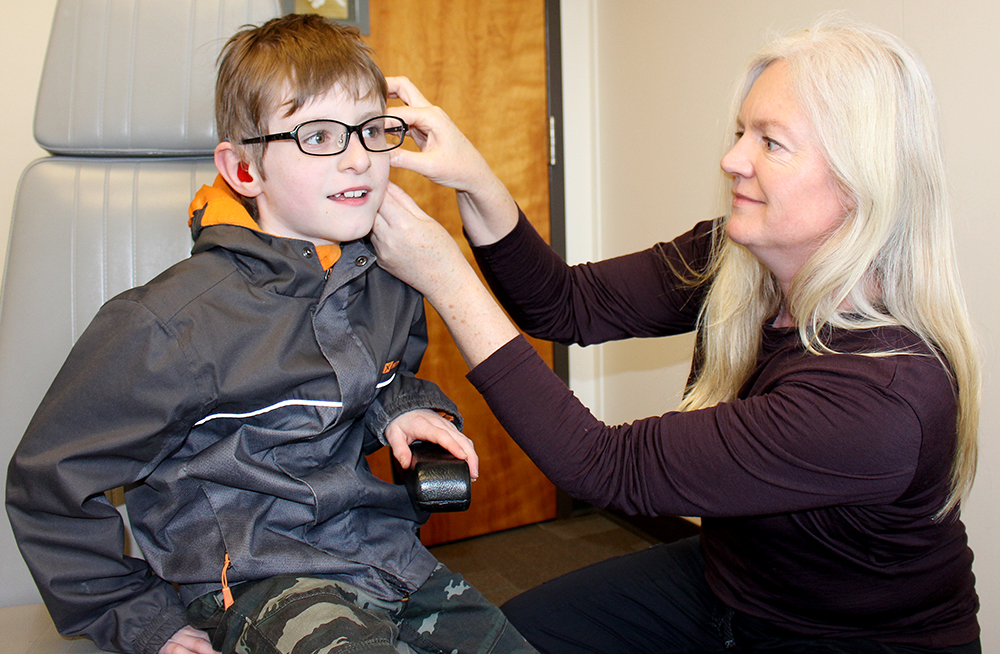 Jennifer Miller, a member of the audiology team in Nanaimo, adjusts a hearing aid earmold for Peyton. Please note: photo was taken before COVID-19 safety measures were implemented.

When Natalie Dennis found out that her son Peyton had hearing issues in 2012, she was near her wit’s end. Just months earlier, Peyton had been born prematurely, weighing less than two pounds on delivery. He spent the first few months of his life at the BC Children’s Hospital in Vancouver, where he endured hernias, surgeries and feeding tubes.

Eventually, the Parksville-based family was able to return to Vancouver Island. Following tests by the BC Early Hearing Program (BCEHP) completed at Island Health’s Nanaimo Public Health Unit, Natalie and her husband learned that Peyton also had hearing loss.

Laura Prout, an Island Health audiologist, delivered the diagnosis – and since then, she’s offered invaluable support for the family and Peyton, now a charming eight-year-old who can hear clearly thanks to hearing aids.

“I talked to Laura about everything. She probably knows more than she should about everything that we have gone through,” says Dennis, laughing. “I had great support 100% of the time. If I didn’t have Laura, I don’t think I would survive. She’s been my advocate.”

This testimonial is just one example of how the BCEHP has helped thousands of children and their families across BC – and on Vancouver Island – since launching more than a decade ago. It’s a fitting outcome, given that Island Health has been instrumental to the program’s development.

An infant screening program for hearing was set up in Victoria in 2002, marking the first of its kind in BC. This effort was led by Ann Marie Newroth, who also helped found the BCEHP in 2005 and served as its first director.

“Because Ann Marie had gotten the program up and running locally, we had some hands-on experience and lots of useful information to take forward,” says Niki Timar, a senior audiologist with Island Health who is based in Victoria.

By 2009, the BCEHP’s screening program was rolled out to include every baby born in the province. Last November, the program – administered by the Provincial Health Services Authority – celebrated the screening of half a million babies. It’s estimated that more than 65,000 babies have been screened on Vancouver Island as part of that effort.

The program aims to screen newborns by the time they’re a month old. Any baby who doesn’t pass the initial screening needs a full assessment, which should be completed by three months of age. Steps to address hearing issues – such as hearing aids – should be implemented by six months. “Younger is better, mainly because research has shown that if you hit those three-month and six-month targets, the language ability by kindergarten entry will be close to normal as long as all the recommendations are followed,” says Timar.

“It can be hard when parents find out their child is deaf or hard of hearing – but there’s all of this support that is going to help them move forward,” says Anne Follows, a senior audiologist based in Nanaimo. “Again, the sooner we can get children moving forward, the better their outcomes by the time they are five years old.”

The program also lends financial support; for example, it provides the first set of hearing aids and offers funding for speech-language pathologists to work with children during the crucial early years.

Peyton currently visits the Nanaimo Public Health Unit every six months for check-ups; the BCEHP has operated at Island Health throughout the COVID-19 pandemic, and protective measures are in place to ensure the safety of families and staff.

Following her experience, Dennis has no hesitation in recommending the BCEHP to other parents.

“I’m so grateful for everything that was given to us,” she says. “When I got involved with the program, it was like ‘Okay, we don’t have to worry.’”