Comox Valley/Campbell River - The North Island Hospital has become the testing ground for an innovative technique that could bring huge savings in hospital maintenance costs and repair times while reducing impacts to patient care. 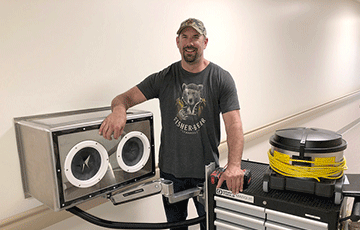 Derek Smith’s ipcGUARD dust abatement system is a great example of thinking ‘outside the box’ while finding an innovative way to work inside it.

Dust control might sound like a simple, household chore, but it’s not when it comes to the hospital environment where infection control standards have come a very long way. Those standards now recognize that dust particles – including fine particles like drywall dust – are a possible transmission vehicle for bacteria, viruses and spores that can make people sick.

Because of this, Canadian Standards require that areas under repair or renovation in the hospital must be sealed off before the work can take place. Something as simple as repairing a hole in a wall requires that a small, temporary negative-pressure room be built around the job, called hoarding.

“It can take the better part of a day to set up the conventional hoarding, with vacuum,” says Smith, a generalist with Honeywell contractor C&W Services, which does maintenance and repair at the North Island Hospital. “When you’re done, you have to clean the entire area inside, vacuum it all down, wipe it all down, and clean the dust off yourself. It’s an awful lot of work.”

Smith previously worked on construction of the hospital campuses in Campbell River and the Comox Valley. It was there, working under the same dust control measures – that the idea began to take shape.

“I just started thinking, ‘there must be a more efficient way. Rather than facing the expense and time of building the environment that you work in, why not build a condensed environment you can work outside of?’”

The result is the ipcGuard, a box roughly the size of a microwave oven, with two portholes covered by a hospital-grade silicone fabric, and a vacuum hose connection. It’s mounted to the hospital’s rolling tool carts via a multi-positional arm. A high-efficiency HEPA-filtered vacuum sits on the tool cart as well.

The entire unit is rolled up to the area of work and the dust containment box is taped in place over the work area to create a seal. With the vacuum running, the worker can put hands and repair tools through the hand ports into the work area. The top of the box is a plexiglass window so that the worker can see the work from outside the box. A vacuum tube inside the box allows for worksite and worker cleanup once the work is done.

That’s where the huge benefits come in. Small scale repairs and renovations can be done much more quickly. Patient rooms and other health care areas don’t have to be shut down for days at a time.

Smith’s innovation has been noticed at Island Health. He demonstrated the device for members of the Island Health board of directors when they toured the North Island Hospital Comox Valley in March.

“This innovation could potentially improve patient safety and save money, which would assist with improving patient care in other ways,” said Wendy Norman, Director of Infection Prevention and Control.  “We look forward to the developments in progress and to this device becoming an accepted standard in Island Health.  It’s not often that thinking outside the box results in an ‘inside the box’ solution!”

“We’re very proud of Derek and so glad he’s a part of our team,” says Tom LeMesurier, Honeywell’s North Island Hospital Facility Manager. “In the very first demonstration we saw what potential this had for both facilities and beyond, particularly in areas where it wasn’t really an option to shut an area down for a long time to do the hoarding, so I was just wowed by the innovation, and that somebody could think outside of the box by creating a box.”

He said Honeywell is glad to be helping to field test something with such huge potential benefits. He estimates the ipcGUARD can bring up to 95 per cent cost savings on countless repair and renovation jobs.

There’s a lot more work to be done to develop the device. The first version – made of PVC tubing and plastic wrap – has been followed by another four generations with additional improvements still be incorporated.

“I know I have more that I have to tweak and improve, to make better, more practical, more commercial,” Smith says. “We’ve proved that the system works. Now we’re gathering the extended research and development.”