The hepatitis C virus can result in liver disease and other serious health impacts. However, many people living with hepatitis C do not have any symptoms and are unaware that they have the virus. This project will encourage more people to get tested, and will link those who test positive with access to treatment using newer medication that is highly effective and has few side effects.

Vancouver Island has one of the highest rates of hepatitis C infection in Canada; it’s estimated that 985 people in the north Island are living with hepatitis C and have not yet been diagnosed or received treatment. “We’re trying to find the people who haven’t been diagnosed, along with those who have been diagnosed but not treated and with whom we have not been able to follow up,” says Dr. Charles Mahoney.

The three-month pilot will be managed by Island Health’s Positive Wellness North Island team (PWNI), and supported with data and expertise from the BC Centre for Disease Control (BCCDC), a project partner.

The project will focus on the region north of Fanny Bay. Those interested in participating can ask to get tested at their family doctor’s office, a walk-in clinic or one of Island Health’s public health units. All clinics, health units and hospitals will also be encouraged to make hepatitis C screening a routine part of their testing procedures. If a patient tests positive for the virus, referrals are made to PWNI, which will follow up to arrange confirmatory lab work and treatment.

The hepatitis C virus is transmitted by blood-to-blood contact. Those who may have been exposed to the virus and should be tested include people born between 1945-1965, people who received blood transfusions prior to July 1990, and those who have injected or snorted drugs. The virus can be transmitted through improperly sterilized medical equipment, tattoo and piercing equipment, and injection or inhalant drug-use equipment, or by sharing personal items such as toothbrushes and razors with others who are living with hepatitis C.

Previously, treatment for hepatitis C was lengthy and took a major toll on the patient’s health. In recent years, however, drugs called direct-acting antivirals (DAAs) have cured more than 95% of patients treated, who now only have to take one pill daily, for an eight-to-12 week course.

“It’s a very effective therapy,” says Dr. Mahoney. “By eliminating the virus and curing patients of this infection, we not only prevent further liver damage, but we also improve their general health. In addition, we stop the risk of transmission. And finally, the health system benefits from major health-care savings.” 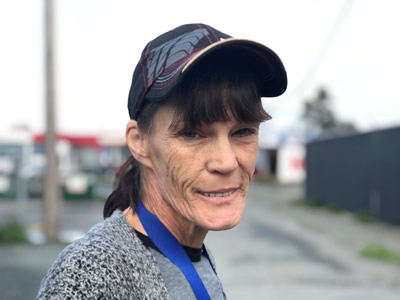 “It was like a walk in the park compared to previous treatments,” adds Laurel Gloslee, who was cured of hepatitis C in 2014 via DAA treatment after two earlier failed attempts using older medications, a process that she describes as “horrific” due to its health impacts. At the time she was also coping with raising her young child as a single mother.

Now, Gloslee, who lives in Campbell River, runs a support group for people with hepatitis C and is involved with community outreach. She also provides telephone-based advice and support for people who have questions about the virus.

Gloslee is still dealing with other lingering health issues due to the length of time she carried the virus (she tested positive for it in 1998). Regardless, she notes that her situation has improved and encourages others to get checked. “Everyone should get tested once,” she says.

The pilot project is a small but important contribution to the World Health Organization’s global effort to eliminate viral hepatitis as a public health threat by 2030. According to a recent report from the Canadian Network on Hepatitis C, an estimated 71 million people live with chronic hepatitis C worldwide. It also estimates that about 250,000 Canadians are living with hepatitis C. Recent data from the BCCDC indicates that more than 28,000 of those individuals are based in B.C.