During a video taken May 30, 2019, 71-year-old retired firefighter Dan Kelly rises from a seated position, performs a little happy dance, and flashes the camera a satisfied grin. What is not immediately apparent is that only one hour prior to the images being captured, Kelly was in a Royal Jubilee Hospital operating room with Victoria orthopedic surgeon Dr. Duncan Jacks and anaesthetist Dr. Jacques Smit receiving his second hip replacement surgery in four and a half months.

“It’s a miracle. You endure all this pain for months and then there’s nothing – it’s like normal again,” says Kelly. “I love those guys!”

Kelly’s second surgery was performed under the Victoria Enhanced Recovery Arthroplasty Program (VERA), a new Island Health pilot project modelled after similar programs in Eastern Canada. VERA is aimed at considerably reducing a patient’s post-surgical pain, shortening their recovery time, and allowing those identified as suitable for same day discharge to go home within hours of their surgery.

“To witness these new protocols working as well as they have and not see the same levels of pain, not see the nausea, vomiting, dizziness – all the complications commonly experienced by our patients after a big operation is extremely satisfying for me as a surgeon,” says Dr. Jacks.

The traditional approach to anesthesia for joint replacement surgeries is to inject local anesthetic into the spinal fluid, leaving everything below the navel profoundly frozen. According to Dr. Smit, many patients who receive spinal anesthetic spend more time in the recovery room with approximately 30% of them experiencing light-headedness and nausea. Under the new VERA protocols, which also includes modifications in surgical techniques as well as the use of different sutures and dressings, hip and knee replacement patients are administered an epidural along with sedation.

“During an epidural we put the freezing outside of their spinal fluid into what is known as the epidural space,” explains Dr. Smit. “We can get these patients mobilized much faster because that residual weakness the spinal anesthesia used to cause which prevents patients from walking wears off extremely quickly – within half an hour after the surgery.”

“As soon as the epidural was turned off Dan’s motor function returned almost immediately and that enabled him to get up and walking within an hour of surgery,” recalls Dr. Jacks. 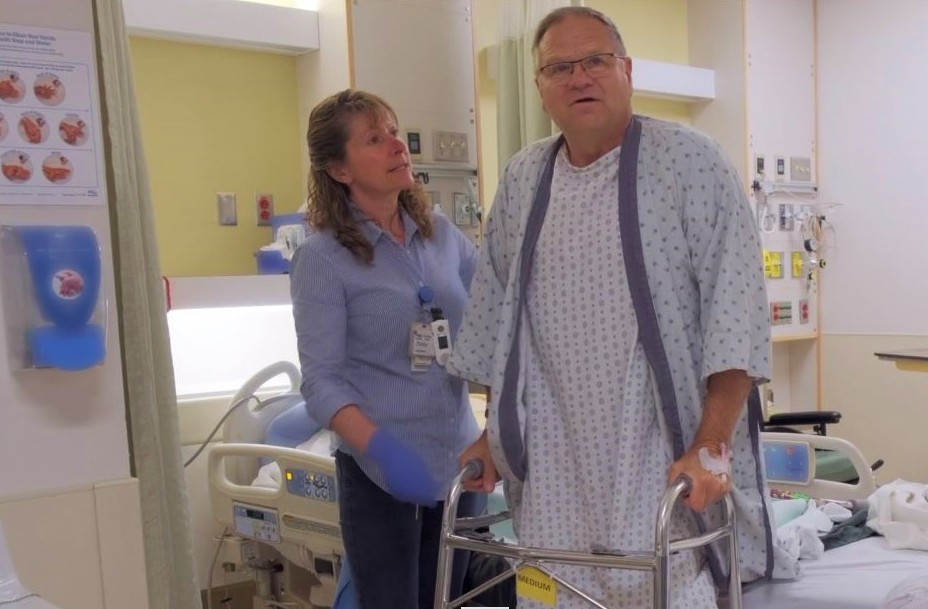 Another drawback of the traditional approach is the worry that following surgery, a patient’s hip can dislocate during the recovery process. However, the new VERA protocols reduce many of those concerns.

“We spent a bit more time closing some of the soft tissues around the hip so that we greatly reduced the hip precautions,” says Dr. Jacks. “Dan was able to move around without worrying about his hip dislocating in any particular position. That really reduced some of the anxiety in the post-operative period and allowed him to get home a lot quicker and recover faster in the first few weeks.”

“The morning after surgery I woke up at home and it was like I hadn’t had an operation,” says Kelly. “I walked out to my deck, sat and had a coffee, didn’t feel anything and didn’t need a cane. It was amazing!”

To date, eight patients have participated in the VERA project with all discharged to home the same day as their surgeries. Dr. Jacks anticipates taking the new protocols to a wider audience by informing other Island Health surgeons, anesthetists and allied healthcare workers about the success of the project.

“It’s been an amazing experience for me to see it get off the ground and I am very excited to see this go forward in coming months. And I’d like to see these protocols applied to all patients because I think not just the same day patients such as Dan can benefit,” says Dr. Jacks. “All patients who require hip and knee replacements ultimately can benefit from the new protocols even if they stay with us for an overnight or longer stay.”

Dr. Smit agrees, describing VERA as an approach similar to how research into high performance race cars eventually trickles down into the mainstream automotive industry.

“Patients like Dan who go home the same day as their surgeries are our Formula 1 cars, but the advantages of using that technology is those ideas and concepts can also benefit patients who used to stay in hospital for several days,” he explains. “Because of our new protocols, patients are going to be in hospital for shorter durations, experience less pain and recover more quickly at home.”

More patients will be enrolled in the VERA program, likely in the fall. There is interest in expanding the program to help with the backlog of surgeries from COVID-19 and to reduce the impact of surgeries on hospital capacity, which will ultimately benefit all patients awaiting surgery.